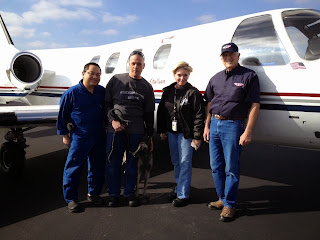 Since I began flying missions for VAC two years ago, each of the 16 missions has been special in one way or another. What a privilege it has been to give back a little to the young men and women of our armed forces have sacrificed so much. Our last two missions have been unique and demonstrate how much others have given to assist in the rehabilitation of of our injured heros. Former Military Policeman, Michael Paz was involved in multiple IED blasts during back to back tours in Iraq. He suffered hearing loss,physical injures to his knees and back with accompanying PTSD. William Garibaldi had a similar history. He was deployed three times to Iraq and once to Afghanistan. He also was involved in several IED blasts and is currently medically retired. What was unique about these two men was that both of them were headed to New Braunfuls, TX to take advantage of a wonderful service provided by Operation K9 run by Joan Moss and Janell Stone-Pritzkau. They provide service dogs that help in the rehabilitation of wounded warriors whether they be suffering physical or mental hardship. It was heartwarming to see the faces of these two men as they began to bond with their dogs. As a dog lover myself, I could easily see what a huge difference this would make in their lives. When we arrived in Okmulgee bringing Will home, he was greeted by his wife and kids who were so excited. We couldn't tell whether it was excitement seeing him emerge from a private jet or they were just so glad to see Dad home, or perhaps it was the excitement of meeting the new canine member of the family. Regardless, it brought a bright smile to my wife Gail's face and mine and made us further realize that what we were doing was well worthwhile.
Posted by Veterans Airlift 5 comments: 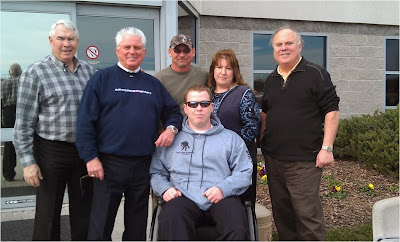 It is such an honor to assist those soldiers who return with the signature wounds of the war on terror in Iraq and Afghanistan. The one thing these men and women all have in common is that they have volunteered to go into the deepest, darkest most dangerous places on earth to preserve American peace at home. They are all heroes and they know and understand fear in a way that thankfully, few Americans do. I have had the privilege to speak with and get to know over 100 wounded American soldiers in 2013 and they all say essentially the same thing when asked why they sacrifice: “We sacrifice not because we have to, we bleed not because we want to, we fight because we need to and sometimes we die, because we love this country.” On one mission request from VAC, we flew Army Sergeant Tyler Jeffries, his mom and dad from Walter Reed Hospital to Ft. Lewis, WA. Sergeant Jeffries, a young man from Florida, lost both legs when he stepped on an IED in Afghanistan just three months before we met him. He wanted more than anything to be at Ft. Lewis to welcome home his platoon as they returned from Afghanistan; the warriors who saved his life on the battle field. When we landed at Ft. Lewis, his entire platoon met him with a red-carpet heroes welcome. He was just learning to walk on his prosthetic legs so we stayed close to him while he struggled with his crutches to stay upright. I will never forget watching Sergeant Jeffries with a huge smile mixed with tears of joy in his eyes as he was greeted by his fellow warriors. Tyler’s mother came over to me and told me she was overwhelmed with joy because this was the first day her son had smiled since he returned home. What a thrill it is for those of us to be even a small part of making this possible for those who have done the heavy lifting for America for so many years. It is important to remember that no matter how much technology improves our weapons or changes the way wars are fought, the heart of a strong military is its people. As you at Veterans Airlift Command always say, “They have heart – They need wings.” It is time for us to return the favor. Every aspect of American life, every business, every industry has benefited from the bravery and sacrifice of America’s Armed Forces. These men and women should get the best care we have to offer. I am grateful for The Veterans Airlift Command who make all the arrangements for us to transport our returning heroes. A huge thanks to Walt, Jen, Maria, Jenna and those who support the Veterans Airlift Command. Richard Iversen, Colonel, USAF, Retired
Posted by Veterans Airlift No comments: 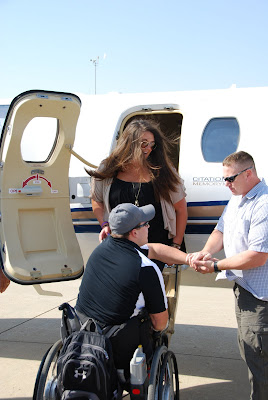