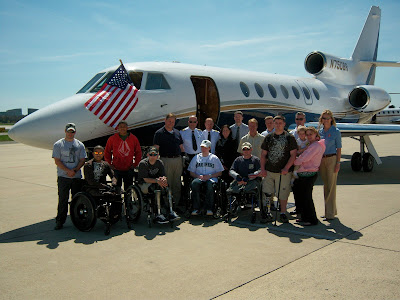 I recently had the opportunity to help organize one of the most inspiring Veterans Airlift Command missions that I’ve had the privilege of taking part in.
On Saturday, April 18th, two Falcon jets flew down to Washington’s Dulles airport to transfer six double and single amputees, veterans of the Iraq and Afghanistan wars, to Boston to compete in the Boston Marathon as members of the Achilles Freedom Team of Wounded Veterans. The two flight crews, Signature Flight Support in Dulles and Boston, MWAA and Massport firefighters went above and beyond to support these great athletes and their family members.

In an effort to boost support for these soldiers, the Veterans Airlift Command, and for the business and general aviation community whose donations make VAC flights possible, we arranged to have several members of the media greet us upon arrival in Boston. The local Fox News and ABC channels, as well as the Boston Herald and Boston Globe were on hand to record the arrival and the inspiring story of the athletes. The cameras were even rolling as the jet pulled up to the Signature terminal with the American flag waving out of the Captain’s window.

Like many of VAC’s passengers, this was the first time on private airplanes for most of the athletes. Signature Flight Support rolled out the red carpet (literally) and the flight crews went out of their way to make the trip comfortable and fun. Both airplanes and their crews stayed in Boston the entire weekend and flew the athletes back to Washington.

…one more opportunity to show just a fraction of our gratitude for the sacrifice these soldiers have made. It was an honor for all of us involved.