Mission: John Kriesel goes back to Walter Reed from Oshkosh 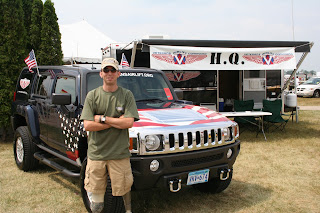 What at awesome week we had at EAA's Airventure in Oshkosh, WI. Sgt. John Kriesel, his wife Katie and two sons 4 and 6 year old Broden and Elijah were there as guests of EAA, AVWEB and the VAC. John was severely wounded in Iraq last fall, having given both legs in defense of freedom. He's an inspiration to everyone he meets. While he was home to greet his unit returning from IRAQ, he took the time to drive our Hummer from DC to OSHKOSH for the purpose of exposure to the aviation community and the general public. (I believe we have recruited some twenty new aircraft as a result.)

John was a magnificent spokesman and was interviewed by the airshow announcer during the performance of the Veterans Airlift Command Flight Demonstration Team which performed its "Salute to the Armed Forces" airshow twice during the week long event.

John says he wants to learn to fly...and his boys were adequately exposed to aviation as well :-)

We met a number of our volunteer pilots at the show (thank you for stopping by to see us) and recruited some new ones as well.

The highlight of the show (for VAC) was the departure from airshow center on Wed. of one of our volunteers (Phil Tholen with co-pilot Kris Kelly) in a Premier Jet with Sgt. Kriesel and his family aboard for their trip back to Minneapolis to drop the kids with grandparents, then on to Walter Reed in DC where John continues his physical therapy. It was a fitting end to the airshow to have one of our heroes aboard the first flight out of Oshkosh when the airfield opened.


Follow this link to the article written online by EAA.