Walt Receives the Microsoft & USO Above and Beyond Award 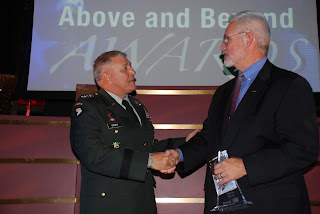 NEW YORK, Nov. 13, 2007 – Americans who offer extraordinary support to the nation’s servicemembers got the red-carpet treatment yesterday during a luncheon held in their honor at the famous Rainbow Room restaurant here.

Microsoft Corp., in partnership with the United Service Organizations, honored the winners of the first Microsoft Above and Beyond Awards. Microsoft recently became a corporate supporter of America Supports You, a Defense Department program that connects citizens and corporations with military personnel and their families serving at home and abroad. USO also is a supporter of the program.

More than 400 nominations were received for the awards. The public was invited to choose the winners from finalists in five categories. The votes totaled more than 30,000.

-- Outstanding Effort Award: Soldiers’ Angels. Patti Patton-Bader started the organization when she discovered her son, who was serving in Iraq, was giving the care packages she was sending to troops who weren’t getting any mail. Since its beginning, the group has grown to include more than 100,000 volunteers who regularly send care packages to servicemembers as well as other programs that benefit military families.

-- Medical Attention Award: Veterans Airlift Command. Walter Fricke, the organization’s founder, is a retired helicopter pilot and a Vietnam veteran who spent six months recovering from a combat injury. His organization’s network of volunteer pilots provides transportation to reconnect recovering veterans and their families. The 500 pilots in the network have flown more than 180,000 miles to reunite hundreds of families.

-- Youth Leadership Award: Brittany and Robbie Bergquist of Norwell, Mass. The teenage siblings started Cell Phones for Soldiers after hearing of a soldier who had run up an $8,000 phone bill calling home from overseas. Shocked that the military doesn’t cover calls home, they worked to make sure servicemembers can stay in touch with family by recycling old cell phones and using the cash to purchase prepaid calling cards that they send to troops serving overseas.

-- Everyday Difference Award: Army Maj. Todd Schmidt, founder of Operation Dreamseed. The organization has sent hundreds of thousands of dollars worth of textbooks, supplies and clothing to school children in Afghanistan, Iraq and Kosovo. Schmidt got the idea while on patrol in Afghanistan after noting that the more the troops supported community schools, the more forthcoming the citizens were with important information that facilitated the U.S. military mission.

-- USO Promotion and Success Award: Paulette Nelson, of Savannah, Ga. Nelson makes sure that every servicemember passing through Fort Stewart’s Hunter Army Airfield gets a welcome home or a farewell. The time of day is of no concern, and she often spends 12 or more hours welcoming troops or seeing them off. She also volunteers in the Savannah/Hilton Head International Airport’s USO lounge.

Soldiers’ Angels, Veterans Airlift Command, Cell Phones for Soldiers and Operation Dreamseed are supporters of the Defense Department’s America Supports You program. “We’d like to thank the exceptional individuals who go above and beyond every day to brighten the lives of our troops in a spirit that is akin to that of the USO,” said Brian Whiting, president of USO New York, during the ceremony. “You put a name and a face to the genuine goodness, compassion and solidarity that are hard at work in this country every day.

“So often it is the unthinkable, the unimaginable, that make the headlines,” he added. “So it is particularly refreshing to focus on, and to celebrate, a few of the everyday heroes among us.”

Michael Allen, director of business strategy and operations for Microsoft’s federal division, said the corporation was excited to recognize these very deserving individuals.

“They are amazing people,” he said. “Every one of them said, ‘This isn’t about me. This is about the families. You’re giving me a way to, hopefully, inspire others (and) bring more people to what I’m doing. But really, it’s about the troops.’”

While all of the award winners were pleased about their awards, they were even more excited about the awareness that recognition from two well-respected organizations would bring to the troops and the need to support them.

“Just to know that Microsoft and the USO know who we are is a huge honor,” Brittany Bergquist said. “It’s a great feeling for us, and it brings … awareness to what troops have to go through daily.”

Patton-Bader also said the award would remind people of what the nation’s troops are enduring.

“It has been a long road since my oldest son returned from Iraq, and my youngest is in Camp Fallujah right now,” she said. “This award will hopefully remind people we still have our sons and daughters in harm’s way. Only by our collaborative efforts can we hope to give the great support our heroes deserve.”

Those collaborative efforts are paying off, according to two senior military leaders who attended the award ceremony.

Marine Gen. James E. Cartwright, vice chairman of the Joint Chiefs of Staff, said the support these smaller organizations, as well as larger groups such as the USO, offer troops is vital.

“They’re just always there for us. These people just give,” he said. “They give well beyond what anyone asks them to give.”

Army Vice Chief of Staff Gen. Richard A. Cody said efforts like those that earned the recipients their awards stand as a lesson to the American public. “

(These groups) show America how they can get behind our soldiers,” he said. “They don’t have to put a uniform on to support our soldiers. Just a calling card, or (frequent flier) miles or the gifts at Christmas time, even just … sending messages to those who are downrange telling them that you care about them” remind servicemembers they have support back home, he added.