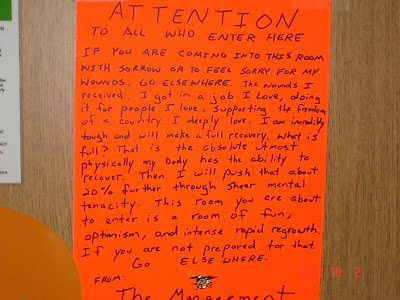 This SEAL suffered two gunshot wounds to his arm and mouth. This is just one more reason we love to serve these wounded warriors.

Posted by Veterans Airlift No comments: 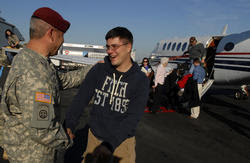 Photo by Raul R. Rubiera
By Kevin Maurer Staff writer - The Sandspur
When Pfc. Jason Bates left his buddies in Baghdad, he was fighting for his life. A roadside bomb had taken his left leg.
Six months later, Bates returned in style.
Bates arrived Thursday in a small silver turbo prop plane with leather seats. He was in town for the award ceremony for the 82nd Airborne Division’s 1st Battalion, 325th Airborne Infantry Regiment. Bates received a Purple Heart and Army Commendation Medal.
He was going to fly Southwest to Raleigh from his home in Lubbock, Texas, but the trip would have taken 11 hours — with two layovers — and hundreds of dollars.
Veterans Airlift Command came to the rescue.
Bates’ three-hour flight from Lubbock to Fayetteville on a private plane was free.
Walt Fricke, founder of Veterans Airlift Command, was wounded in Vietnam. He was a helicopter pilot who spent six months in the hospital after being medevaced out of Vietnam in 1968.
“I was 700 miles away from home. I was disconnected from my world,” Fricke said. “My healing didn’t start until I made those connections.”
Fricke started the charity in November 2006 as a one-man operation. His plan was to run it himself and fly just a few veterans around. In a year, it has exploded into a national charity with 550 pilots and airplane owners who donate their time and planes.
Terry Tyler and co-pilot Mark Wells were honored to fly Bates and his family.
Neither Wells nor Tyler served in the armed forces. Both see flying for Veterans Airlift Command as their service.
“The veterans have served us,” Tyler said. “We just give back a little.”
Bates’ plane taxied to the front of the terminal Thursday at Landmark Aviation at the Fayetteville Airport.
As the props stopped spinning, Bates — silver cane in hand — threw open the door and gingerly walked down the steps to the applause of his friends and Army buddies.
“I didn’t think everybody was going to be there,” Bates said.
He was injured in May 2007 when his convoy was hit by a roadside bomb.
Sgt. Ezequiel Mora kept pressure on Bates’ wounds as they raced to the hospital.
“We’re going to make it,” Mora told Bates then.
“I know,” Bates said.
Thursday at the airport, Mora was on hand to greet Bates. He said that Bates was the strongest person he knows.
“He wasn’t panicking too much,” Mora said. “He was just saying his leg hurt.”
The friends kept up with each other as Bates healed and Mora finished his deployment in Iraq.
Bates worried about his friends every day.
“As it got closer to them coming back, I was worried more and more that someone was going to get hurt,” Bates said.
With the battalion home, Bates could finally relax. But to Mora, the homecoming wasn’t complete.
“I’ve been looking forward to seeing him since I came back,” Mora said.
On Thursday, as Bates got off the plane, his cane and a slight limp were the only clues to his injury.
As he got closer, Mora and more than 30 paratroopers lined up to greet him. Each soldier shook his hand and hugged him. There were few dry eyes in the bunch, which made most of the paratroopers uncomfortable.
“The sun is bright out here,” joked one paratrooper.
“Where did all this dust come from,” said another, wiping his eyes.
The paratroopers stood near the plane and shared stories and a smoke. At one point, Bates lifted his pants leg and rapped his metal cane against his new metal ankle.
At Friday’s award ceremony, Bates — in uniform but carrying his cane — was almost indistinguishable from the hundreds of other paratroopers.
But, the ceremony was only an excuse to make the trip. Bates really came back to Fort Bragg for his friends.
“Its like a big family,” Bates said.
He has come a long way from that day in Baghdad, but the journey was over.
He was home. And so were his buddies.
Staff writer Kevin Maurer can be reached at maurerk@fayobserver.com or 486-3587.
Posted by Veterans Airlift 1 comment: