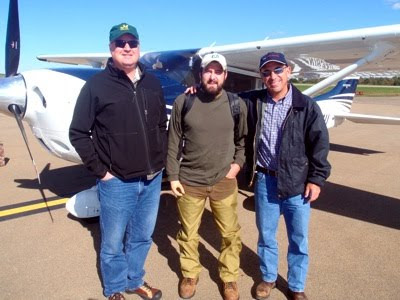 It was a great honor flying a Purple Heart recipient from Palestine, TX to Camp Hope, Farmington, MO. Camp Hope is formally known as Chris Neal Farm, in memory of Chris Neal who died fighting for his country in Iraq several years ago (www.chrisnealfarm.com).

Our hero/passenger was severely wounded in Iraq. While on patrol, the Humvee he and his comrades were traveling in struck an improvised explosive device (IED). Three soldiers perished, two survived.

This soldier will tell you that he was just doing his job. That he is nothing special. I beg to differ. This young man has a fine disposition, and positive attitude. He answered all questions with a yes sir, and no sir. He did not complain about the pain he obviously felt cramped in the back seat of the plane or the turbulence we hit coming into Farmington. In general, he was a fine example of what is “good” about the men and women of the United States Armed Forces.

It is a useful when things are not going our way to remember the great sacrifice these soldiers are making. At least in my case, problems seem petty and insignificant compared to those of a wounded hero.
Posted by Veterans Airlift 3 comments: